Anthropogenic skyglow is currently a serious threat to natural environments near human settlements; however, a spread of light over wide areas is difficult to predict due to uncertainties in the city emission function (CEF) from many light sources. The CEF determines the rate at which skyglow varies with distance to a light source but remains virtually unexplored because appropriate retrieval tools have been unavailable. However, we have now obtained the CEF from ground-based night-sky radiometry and conducted a successful experiment to retrieve the CEF of an urban area.
The city emission function (CEF), describing the angular emission from an entire city as a light source, is one of the key elements in night-sky radiance models. The CEF describes the rate at which skyglow depends on distance and is indispensable in any prediction of light-pollution propagation into nocturnal environments. Nevertheless, the CEF remains virtually unexplored because appropriate retrieval tools have been unavailable until very recently. A CEF has been obtained from ground-based night-sky observations and establishes an experiment successfully conducted in the field to retrieve the angular emission function for an urban area. A database of CEFs could initiate a completely new phase in light-pollution research, with significant economy and advanced accuracy of night-sky brightness predictions. 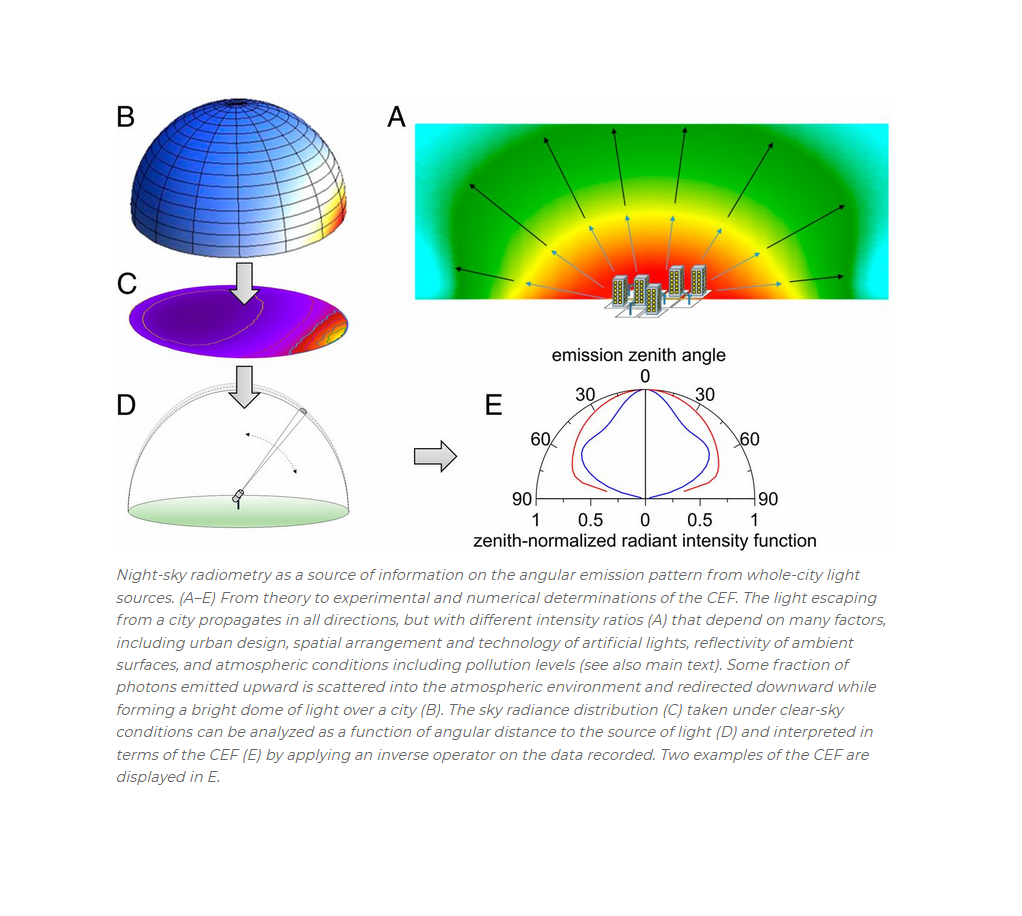 The population of artificial satellites and space debris orbiting the Earth imposes non-negligible constraints on both space operations and ground-based optical and radio astronomy. The ongoing deployment of several satellite ‘mega-constellations’ in the 2020s represents an additional threat that raises significant concerns. The expected severity of its unwanted consequences is still under study, including radio interference and information loss by satellite streaks appearing in science images. A new skyglow effect produced by space objects increases night sky brightness caused by sunlight reflected and scattered by that large set of orbiting bodies whose direct radiance is a diffuse component when observed with the naked eye or with low angular resolution photometric instruments. According to our preliminary estimates, the zenith luminance of this additional light pollution source may have already reached 20 μcd m−2, which amounts to an approximately 10 percent increase over the brightness of the night sky determined by natural sources of light. This is the critical limit adopted in 1979 by the International Astronomical Union for the light pollution level not to be exceeded at the sites of astronomical observatories.