Straintronics is a rapidly developing new research area in micro-, nano-electronics and material science, where strains induce physical effects in solids utilized for new generation electronic devices. It is well known that strain-gradients can induce polarization even in non-piezoelectric solids and this effect is called as direct flexoelectricity. The size effect at nanostructures is observed due to comparable sizes of the nanostructure and the microstructural material length scale. However, classical continuum mechanics cannot be applied since the influence of material microstructure is neglected and the results are size-independent. Although great success has been made for piezoelectric materials with macroscopic characteristic dimensions, applications of the conventional continuum theory to nanoscale structures are not acceptable because the size effects may be prominent in behavior of nanoscale samples, as it follows from atomistic simulations and experiments. Although higher-grade continuum models gives the possibility to explain size effects, the mathematical formulation becomes much more complex than in classical theory. The strain gradients play a significant role in the vicinity of crack fronts not only for influence of elastic stresses, but also the electric polarization can be induced in dielectric materials (so-called direct flexoelectric effect). For description of the electro-elastic response within the gradient theory of continua, we have developed variational formulation resulting into the governing equations and possible boundary conditions. Because of high order derivatives of field variables, the standard FEM and commercial computer codes are inapplicable. The mixed FEM has been developed for numerical solution of derived mathematical formulation of considered coupled-field problems. Numerical simulations have been accomplished for fracture mechanic analysis of piezoelectric nano-sized structures under a thermal load with including flexo-effects. Results indicate that the value of J-integral and the crack displacements are decreased owing to flexoelectricity and it should be considered in dielectric solids. A changes of polarization due to appearance of micro-cracks can be utilized for their detection. 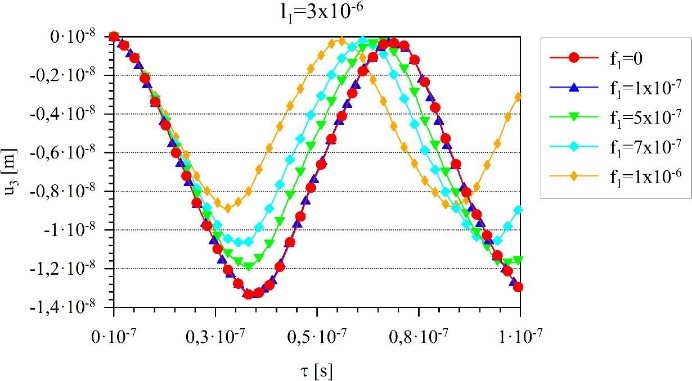 Fig.2. The geometry and boundary conditions (left) and the temporal variation of the beam deflection at the point 5×10-7,0.5×10-7 for various flexoelectric coefficients and l1=3×10-6