In the energy-conscious design of buildings and for new architectural concepts of condensed or atria-grouped all-glass spaces daylight plays an integral and influential role having important environmental and energy saving consequences. Furthermore, ´healthy´ buildings with computer-controlled conditioning and regulation systems have to eliminate excessive solar heat gains as well as optimise solar energy and daylight use by conserving electricity when abundant skylight triggers photo-sensors dimming or switching off artificial luminaires while sufficient daylight is available. These current professional needs and the state of art in daylight design justified this original research endeavour within the U.S. and Slovakia cooperation under the grant project „A set of standard skies” which was finalised recently. Now its results can be disseminated in professional circles, used for international standardisation as well as applied in design practice.

The fundamental knowledge of sunlight scattering under different turbidity enabled:

Thanks to the American partner sky luminance data bank gathered in Berkeley, California was available and a selection from over 16000 measured all-sky scans was possible with additional parameter information which enabled the analysis and comparison to similar skies measured in Tokyo and Sydney, as well as to comparable conditions and resulting illuminance levels recorded in Bratislava during 1994-1997.

Besides the sky standardisation in relative terms as used by CIE now, the need for absolute sky luminance distribution in kcd/m2 and resulting illuminance level from sunlight and skylight in kilolux stimulated a further study and analysis of illuminance conditions under particular typical skies. The resulting interdependence between sky type, sky brightness and clearness or turbidity, as well as turbidity in the sun direction has helped to define the skylight clusters and turbidity fans and thus also for every sky standard relevant formulae to calculate absolute zenith luminance, skylight illuminance related to sunlight under various turbidity via the second set of A, B, C, D, and E parameters. The concept of the standardisation and all basic formulae and parameters are summarised in the main body of the final report and also documented in the catalogue which contains all fifteen skies proposed for standardisation. Furthermore, a user-friendly computer program with an arbitrary choice in the set with resulting either a relative or an absolute luminance distribution pattern with relevant levels is available on request (as documented in an example on Figure 1). 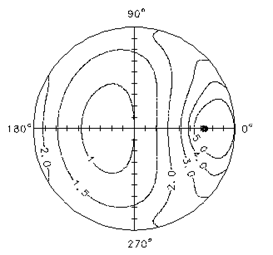 Fig. 1 Typical clear sky luminance pattern in the plan projection of the sky vault normalised to zenith
This original approach to sky standardisation and world-wide capability of application present a unique possibility to use this set not only for design purposes on the territory of the U.S.A. and Slovakia but also internationally through the CIE – ISO standards. Therefore, the CIE expert committee TC 3-15 „Sky luminance models” was informed about the main results of this project during its 1997 meeting in Kyoto and European experts during the 1997 Lux Europa Conference in Amsterdam. Future CIE General Session in Warsaw is expected to hear a concise paper „Universal models of reference daylight conditions based on new sky standards” as well as a poster „A Catalogue of fifteen sky luminance patterns between the CIE Standard Skies”, that will also offer a free booklet containing the first part of the final report. Various partial results were already published in 34 papers in renown journals and conference proceedings.

The choice of a critical sky or standard has to respect local or regional studies of sky frequency occurrences and the purpose-oriented codes of practice for several application regions:

Although this new set of sky standards is to provide more flexibility in application at the same time a more detailed description and specification of daylight conditions will express not only the world-wide systematic unification and comparability but also the locally typical, most frequent or critical sky patterns. Thus applying certain sky standards from this proposed set can form the basic exterior conditions to solve various problems in energy conscious window design or serve to new calculation methods and means to predetermine daylight climate, artificial lighting control systems, visual comfort and glare aspects etc.

In a partial sense the universal sky specification and standardisation basis are important for a better and more effective utilisation of skylight which is a significant source of renewable energy and a significant environmental factor supporting the well-being of humanity.