Some results of expert‘s activities

Concretes reinforced with the dispersed fibre reinforcement – FRC become more frequently progressive and dominant structural materials in the building industry. Concretes FRC with enhanced working characteristics in tension are of use mainly in structures, whereof requirements of limit state of cracking are decisive. In addition, these structures are able to carry certain stress value at the specified crack development – bridging effect.

They are Stress-strain curve of the prism completed on the limit lines of the strength classes according to EFNARC predetermined for the specific application as e.g. storage containers, tanks and other structures used to minimise deteriorating effects of the stored materials on the environment. The application of the concretes with the dispersed steel reinforcement – SFRC in the traffic structural engineering is particular. They are used as structural and insulating layer of the lining in the form of “wet” or “dry” spray for the line underground constructions.

In the year 2001 verifications tests of slabs made of the sprayed mixture for the trial tunnel of the tube Branisko were performed at ÚSTARCH. The tests were evaluated according to the absorbed energy. In the year 2003 the consecutive experimental programme comprising slab and prism tests was carried out. In the frame of the programme the applicability of the various designed types of the sprayed mixtures for the lining and the trial tunnel of the road tube Višňové were examined. The test method was based on the European Regulations – EFNARC. (For Doprastav, j. s. c. Bratislava, plant Žilina)

Tests of sprayed plates, a – determination of loading force Fcr at cracking, b –deflection vs load and deflection vs energy W25 relationships, c) – test set-up and the specimen after failure

For control of wind loads there was suggested the idea of possible erection of wind/screens on the bridges located in wind induced territories. The wind-screens suggested allow automatic control of bridge response as well as of security and reliability of the traffic in all wind forcing situations occuring. Th idea of wind-screens is based on the control of wind flow on acting on the roadway and on the running vehicles. The wind-screens allow the change of laminar air flow into turbulent one, with distinct decrease of the wind pressures appearing. The treatment of above problems was made by theoretical, numerical and experimental approaches in the wind-tunnel of Institute of Construction and Architecture of Slovak Academy of Sciences in Bratislava in September and October 2006, in cooperation with design office ALFA-04 in Bratislava. The view of one of the model tested is submitted below.Project APVV, (Nr. APVV – 1562): Control of optimal bionics structures and materials.

The progressive built-up aerated concrete lintels are a component part of the inside walls of structures as well as of the external ones. In the latter case they are subjected to the interactive effects of bending, shear and torsion. The advantage of these lintels consists in the rapid construction compared to the traditionally manufactured elements and also in their correspondence to the dominating structural material in term of thermo-insulating conditions.

Preparation of the test configuration, wall with the lintel in time of test

An extent experimental – theoretical research focused on the influence of the time factor on the load bearing capacity and deformation characteristics of the real loading configurations was performed in the laboratories of USTARCH SAV. At the same time, a material investigation was carried out which verified the assumptions of aerated concrete behaviour under special testing conditions. The input parameters were as follows: the simulated environment (laboratory, sheltered outdoor environment, environment with the controlled enhanced content of the carbon dioxide) and the real load levels.

Influence of time factor on the deformation eps(mb-u, b) and eps(cs-l, r) of top and bottom edge in the centre of bending and of the tension diagonals left and right of the centre of shear, respectively is influenced mainly by the thermal-humidity conditions of the environment. The time course of the deformations of the material specimens was similar, in addition it proved that the loading level expresses itself on the initial deformations and does not effect their further course. The effect of the environment was decisive; the biggest deformations being measured on the specimens subjected to the accelerated carbonation. No degradation effect of the long-term loading on the load-bearing capacity of the lintels could be proved.

From the tests of specimens, it resulted that the compressive strength and other mechanical characteristics are mostly effected by the environment, the carbon dioxide showing the most degrading effect (Applicator Xella Pórobetón SK, l.t.d., Šaštín).

Highway concrete crash barriers are relevant component of the safety system of the important road communications. The concrete crash barriers consist of the precast concrete units connected by means of the steel locks. The locks ensure wholeness of the barriers on the one hand; on the other hand they must react as damping elements of the deformation area at presumptive accidents. Therefore, at their design, the enhanced attention is paid to the reliable fulfilment of the prescribed criteria. At the vehicle accident, the tensile stress occurred in the locks of the adjacent barriers. In co-operation with the Doprastav, Bratislava, s. c. the experimental method of the simulation of the real tensile stress in the barrier locks was proposed. The previous tests of locks in the very barriers – the experimental investigation carried out in the year 1999, were replaced by the detached tests of the locks alone.

The tests of locks  – arrangement of the loading jacks / side view

The presented method is fairly progressive from the financial, time, and effectual point of view.

Average values of the longitudinal deformations of the locks

The obtained experimental results produced the essential base for the global assessment of the reliability of the highway concrete crash barriers locks and for the acquirement of the certification license (Applicator Doprastav, Bratislava, s. c.).

Achieved within solution of the research and development objectivefor MDVRR SR:  Details for the design of structures aimed on snow loading effects, responsible solutionist: Z. Sadovský.

For the design of structures purposes a new procedure of analysis of exceptional snowfalls was prepared, where engineering and climatological aspects of this natural phenomenon were jointly taken into account. The first step of the analysis was an identification of exceptional annual maxima of ground snow loads on particular climatological and meteorological stations (globally 55 + 605 stations) during  52 to 56 winters which are beside of regularity of a rest part of the annual maxima statistic series. Consequently, there was performed a climatological expertise which determined, within the Slovak territory,  3 connected plain regions and a region of mountain valleys with similar climatological conditions for occurence of the exceptional snowfalls. In particular regions, the accidental snow loads were analysed as  values transcending a treshold multiple of characteristic loads, which are derived from a regular part of the statistic series for the mean recurrence time 50 years.  On basis of a number of all stations and winters with measured data in the region, a distribution function was given, which upper tail was approximed by Pareto and by an exponential distribution function, i.e. by the heavy-tailed and the light-tailed distributions. A nonlinear regression based on the method of least squares and absolute deviations was applied. The accidental snow load adequate to the mean reccurence time 10000 years was derived from the best approximation of the empirical distribution function. The regions of the accidental loads occurence are depicted on the  figure below, and the coefficients k determining the accidental snow loads as multiples of the characteristic load are presented in the table.

The assesment of accidental snow loads is related to the arragement of a new card of characteristic snow loads and to the optimalization of partial coefficients for snow and wind loads on representative frames of low-floor industry buildings solved in the project. 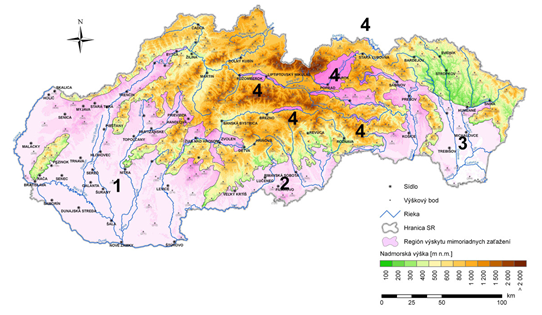 The topic of the expertise was the assesment of an ultimate aeroelastic behaviour of selected bearing elements of photovoltaic power plants being erected in Southern Slovakia in locations FVE Hurbanovo, FVE Ožďany G1, G2, G3, FVE Ožďany G4, FVE Buzitka, FVE Hladký Majer – Lučenec, FVE Slatina, FVE Lipany, FVE Kladzany, FVE Varhaňovce, FVE Nový Ruskov, FVE Fulianka and FVE Poľany. The implementer of building activities in the given sense was the company RAAB Villanyszerelö Kft., Csörgöfa Sor 6, Györ. Due to the small height of skew plates of the photovoltaic power plants above the ground, the cataract wind flows occure on the low edges of the plates. These flows are associated with an enhancement of wind speeds and thereby also pressures on the bearing systems which support the plates with the photovoltaic panels. This fact affects a design and dimensioning of these bearing structural elements. In regard to the variability of a surface configuration of the photovoltaic power plants, characterized by artificially created boundary layers in small heights above the ground, there appears strongly turbulent wind flow with parameters which are measurable only in scope of experimental research in a wind tunnel in accordance with the recommendations of STN EN 1994–1–4 Eurocode 1: Actions on structures, Part 1-4, General actions – Wind actions. Solutions of the introduced problems were performed by theoretical, numerical and experimental analysis on models in the wind tunnel of the Institute of Construction and Architecture, Slovak Academy of Sciences, in May 2011. On the basis of the obtained results the final recommendations concerning the safety and exploative reliability of the objective bearing elements of the photovoltaic power plants and also of their anchor or supporting structures were specified. 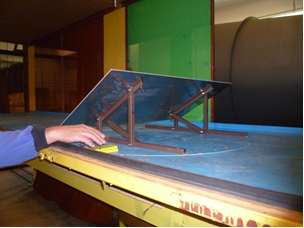 Sight on the tested model. 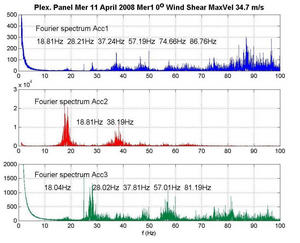 Measurement Mer1 at the angle 0°. Calculated Fourier spectra of accelerations A1, A2, A3. The wind speed 34.7 m/sec. 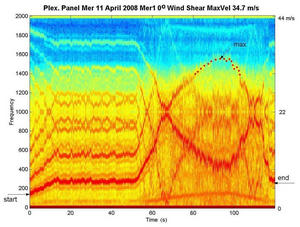